The new bean movie is coming!

Atkinson now returns for a new Netflix series, titled Man vs Bee, where he plays Trevor, a house sitter who finds himself in a battle with a bee. Here he tries to avoid irreparable damage being done. Man vs. Bee premiered on Netflix on 24 June 2022 and received mixed reviews from critics.

In fact, Netflix libraries vary wildly depending on the country you're in. It's a process called geoblocking. And it could be stopping you from catching up on Man vs. Bee. A VPN allows you to connect to a remote server in a different location. That means it can conceal your IP address and grant you access to all of Netflix's geo-restricted movies and TV shows. 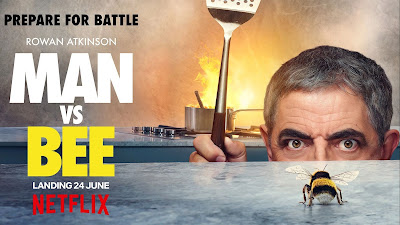 How to watch Man vs. Bee on Netflix with a VPN?

Not every VPN can access Netflix US without hiccups all the time. Netflix uses anti-VPN technology to compare your IP address with a list of known VPN servers, and if it finds a match, you won’t be able to watch your stream. Luckily, there are a few premium VPNs that can bypass VPN blocks by regularly refreshing their servers'IPs to avoid detection. FlyVPN has 500+ VPN servers in 40+ countries, so there’s always an available connection to stream Netflix from anywhere.

If you want to test it for yourself before committing, you can try FlyVPN risk-free backed. FlyVPN offers a free trial VPN service and 24 hours trial VPN Package. I hope this guide will help you learn how to watch Man vs. Bee on Netflix from anywhere. If you have any questions, feel free to ask in the comments section below.